by Sick Codes
in Tutorials
1

Epic method to have virtual desktop that you can control a Windows Desktop on iPhone & Android, as well as other desktops.

(you can skip this step if your don’t want Photoshop on your virtual desktop).

This step is ripped from this guide: http://prodesigntools.com/adobe-cc-2015-direct-download-links.html
1. Visit http://www.adobe.com/go/tryphotoshop_elements because you need an adobe cookie first.
2. Sign in, or if you don’t have an Adobe ID, click Get an Adobe ID. Use can use random personal information including a temporary email address just for the download.
3. Click download, and once the download starts, cancel it.
4. Download the Photoshop CC 2015 (32-bit) direct from the download link, which at time of writing is 693 MB and the URL (only accessible once you have a valid cookie) is http://trials3.adobe.com/AdobeProducts/PHSP/16/win32/Photoshop_16_LS20_win32.7z

I suggest Ubuntu or Debian for desktop servers, with high IOPS, an SSD, minimum 2gb of RAM and at the absolute minimum 2 CPUs.

I started with a 4x CPU, 4gb VPS in New Jersey from Vultr. They’ve had 4 outtages in the 2 years that I’ve been using them and they may reboot your server sometimes, so save your work!)

Log into your server as root and run the following:

# install ubuntu desktop (this can take 5 mins or more depending on where your VPS is, and if it’s powerful or not)
sudo apt-get install ubuntu-desktop -y

# install some swap memory for additional memory (optional, but highly recommended, this works for both Ubuntu 14.04 and Ubuntu 16.04)
# some guy made a super easy swap memory script for ubuntu installations
# first verify how much ram you have on your server
free -h

# spawn a test display to create user password and init file NOTE PASSWORD IS 8 CHARACTERS ONLY
vnc4server -geometry 1920x1080
# it will ask you to put password twice, then we can kill the spawned desktop  as we should install some more apps and reboot it first
vncserver -kill :1

# optional: if you don't like starting programs with terminals, you can add a dock (like on Mac)
sudo apt-get install plank -y
# add it to the x startup too so every time you start a desktop, it's right there
echo "plank &" >> ~/.vnc/xstartup

After it’s rebooted, ssh back into the server and spawn a working desktop (start an x session)

Since your don’t want any headaches later, make sure you’re always working on :1
If it didn’t show :1, then there’s already a desktop running, so to maximise VPS resources, kill any other ones first
vncserver -kill :1
vncserver -kill :2
vncserver -kill :3
And then make a fresh one just for you:
vnc4server -geometry 1920x1080

You can be creative with geometry, maybe you want an iPhone screen sized desktop, so find out your iPhone screen resolution and add it in start a session:
Since iPhone 6 is 1334×750, lets make an iPhone 6 friendly one.

If you can’t move windows around or want to open apps in your session via ssh, here are some examples:

Connect to your new Ubuntu VPS Desktop from a Linux PC/Laptop:

# there are many Desktop VNC viewers but I really like Remmina.
sudo apt-get install remmina 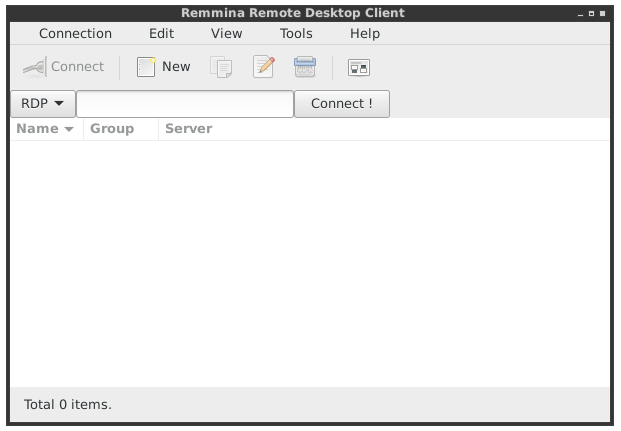 Leave Repeater and User name alone, but for Password put the password in from earlier (it’s only 8 characters!)
Note: if you forgot the password, ssh into the server and type vncpasswd to initiate a password change (it will ask you to put in the password twice and it must be <8 characters long.

Use the IP of your VPS and add a trailing :1 or :2 depending on what it said before, press save, then connect and you’re good to go. 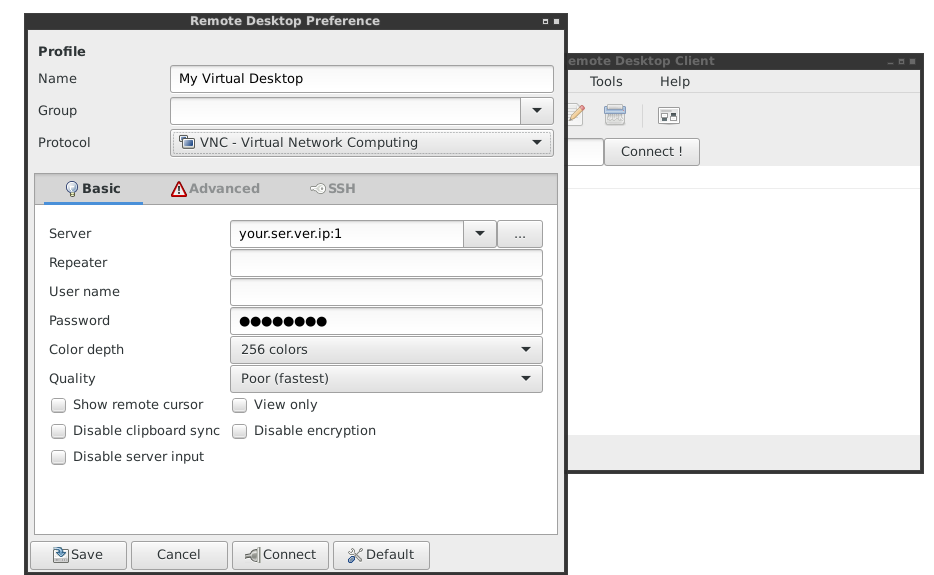 Use your iPhone to control your new Ubuntu/Windows VPS Desktop:

Input your server IP address with the a trailing :1 or :2 depending on what your server mentioned before, press save. 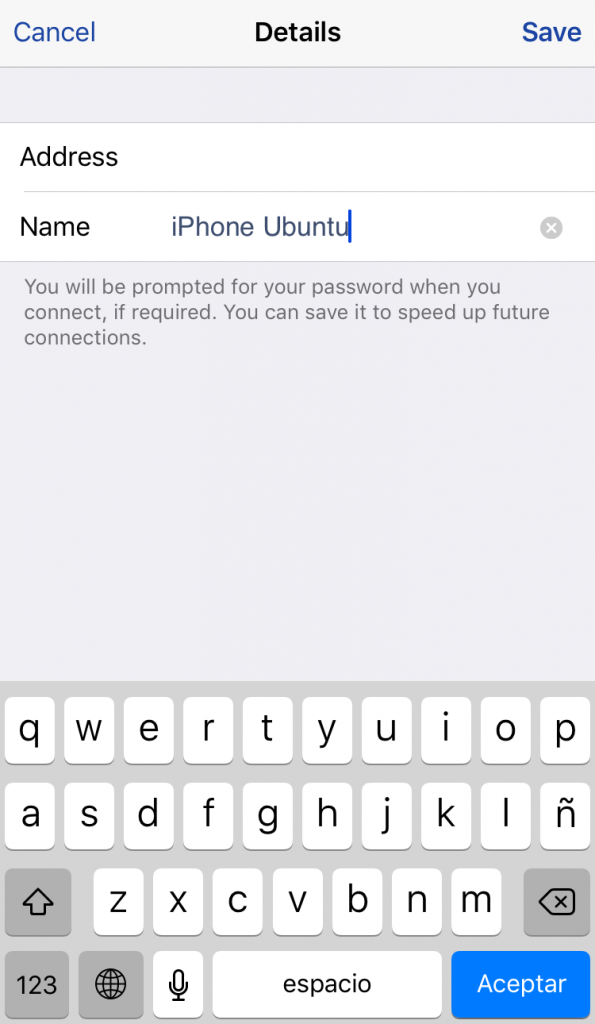 Connect to your server. You should get an “Unencrypted connection” warning. Hit connect and you’re set! 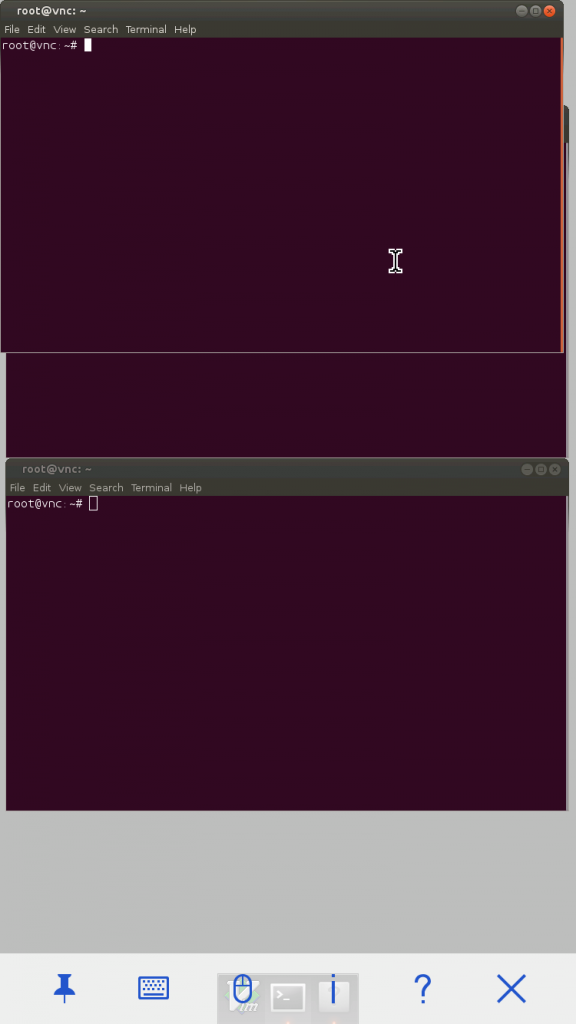 You can go ahead and install Firefox: apt-get install firefox 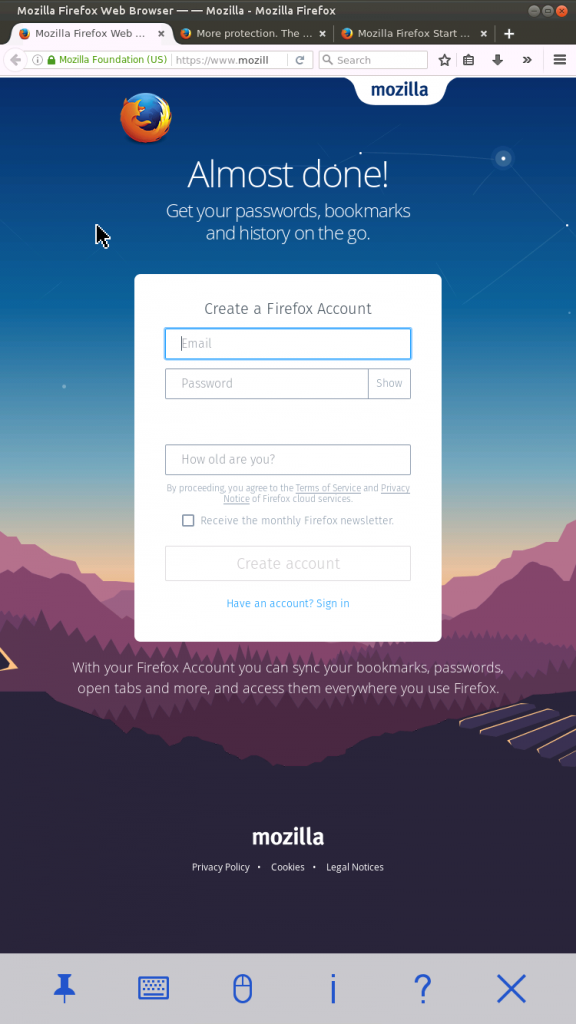 Use your Android to control your new Ubuntu/Windows VPS Desktop