by Sick Codes
in Tutorials
0

/home/user/Pictures/How to get photoshop to work on debian and ubuntu arch.png

This article alone was published in 2016 and 4 years have passed since I first wrote this so I would like to mention the most important things I’ve realized during that time. many things have happened since then

Rule 3: Some tools are better in different versions of Photoshop (old vs. new and new vs. old)

The version that I use every day on my system is Adobe Photoshop CC 2016 (32 Bit). The best and smoothest version of Photoshop that works on Linux is Photoshop CS6 32bit. On my previous Ubuntu 14.04 setup, I was running wine .

However, on my bare-bones Debian 8 installation, I was having deep frustrating problems with some random incompatibilities in the order of the way I tried to install wine. By far the easiest way to install Photoshop CS6 100% working on Linux is with a program called !

UPDATE 2021-09-15: Just use wine. Here is my runner script once you have installed it: https://sick.codes/arch-linux-photoshop-cc-2018-2019-working/#My-Photoshop-Runner-Script

Step 5: Type photoshop, and then click Install Unlisted Application. It will show in a dropdown menu as the last item.

Step 6: Find your Setup.exe for Photoshop. You may need to disconnect from the internet for this to work. Step 7: Post-installation fixes in Edit ->Preferences Workspaces: turn off Floating Document Window Docking Tools: turn off tooltips if you don’t need them as they sometimes sticky on top of other desktop windows. Turn off animated zoom (laggy.) Performance: depending on your specs, you can adjust the RAM usage and the Graphics processor toggle. I use without Graphics processor.

First, go to photoshop.com or adobe.com and find a trial download version of photoshop. This tutorial below is for CC 2015 AND CS5 AND CS6: Then, download a program called PlayOnLinux. PlayOnLinux is a graphical version of wine that automatically installs the relevant versions of wine and libraries so you don’t have to worry about anything. sudo apt-get install playonlinux Open PlayOnLinux and click Install a program. (In the image below ignore my installation of Photoshop CS6 because during this tutorial I will be installing Photoshop CC on Debian 8.) 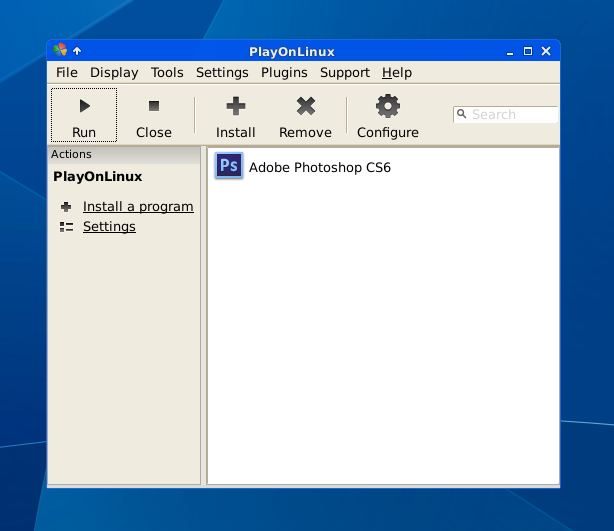 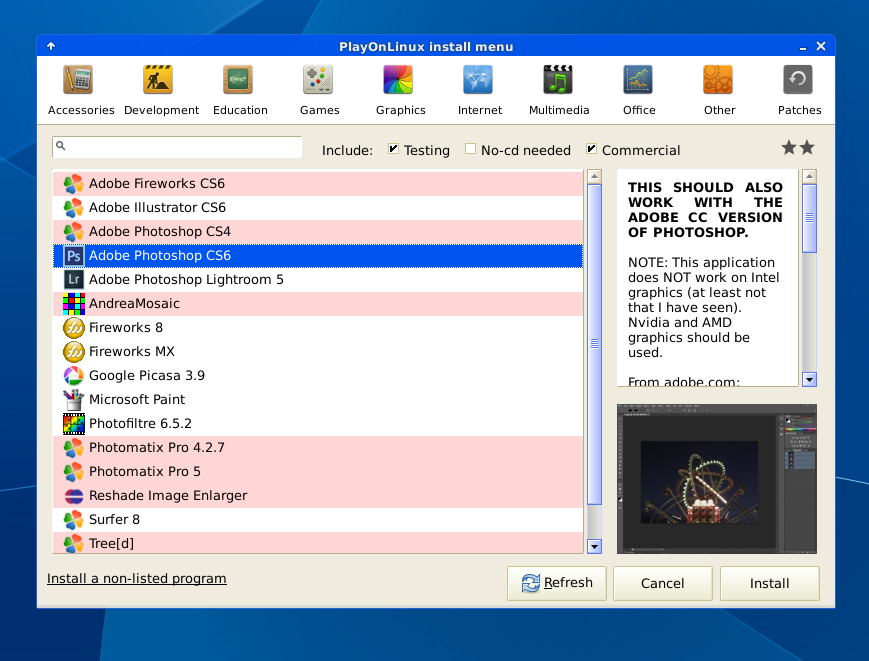 Then click on Next, and then Browse, and then navigate into your downloaded Photoshop folder and find Set-up.exe. Choose a New Virtual Drive.

BONUS: Get all your fonts from Windows into your Photoshop CC/CS6 installation on Linux!

For a while, I was using Photshop inside virtual box. The only reason I kept using a virtual machine was because I had all of my fonts in there… To move fonts to your new PlayOnLinux installation of Photoshop: Open your file manager. Navigate to: ~/.PlayOnLinux/wineprefix/ Open the folder of your relevant installation. Enter the folder called drive_c, then windows, then Fonts. You can paste all your .otf and .ttf font files here and next time you open Photoshop, you will be able to use those fonts. If you are currently using Photoshop, save your work, close Photoshop & PlayOnLinux, and then open it again. Your fonts will be ready to use. Alot of guys tell me the only reason they are still using Mac or Windows is either because of games or photo and video editing software. What I will say to you is that you can run quite a lot of the most proprietary of software inside of a linux machine.