You first need to install the nginx package:

Then you need to add nginx service to the firewall at both https and http ports, publicly.

Then, you need to enable Cockpit with the systemctl

Then add Cockpit to the firewall exceptions

Cockpit is located at port 9090 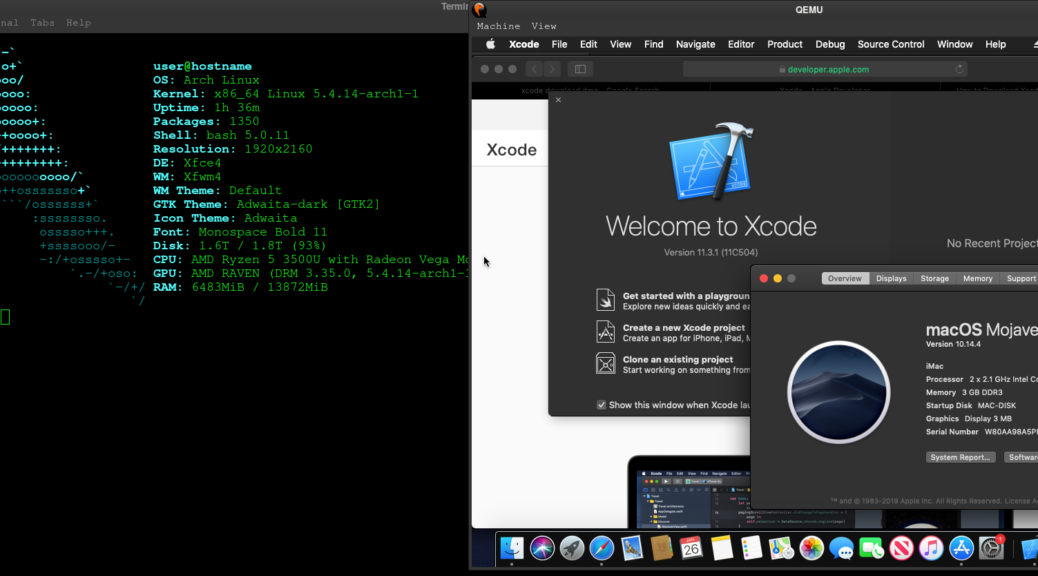 Linux users on Arch or Manjaro attempting to install macOS/OSX in VMWARE, or QEMU/KVM, will greatly benefit from this tutorial.

This tutorial is great for Linux users who want to use XCode 10 or 11 on Linux without Dual Booting!

How to Install macOS VM on Linux

If you don’t have yay (Arch User Repository package manager):

You will need a MAC iso file, which is around 6GB downloaded.
Make sure you download the iso in the disk or device that you are going to run the VM from.
A great way to download OSX ISO files is using gibMacOS:

This will run a small Python script that will allow you to download mac iso files from *.apple.com

Next, you will need qemu & libvirt for virtualisation and emulation.
Also required during qemu installation:
– dnsmasq for networking
– virt-manager but not required
– bridge-utils for additional networking Requirements

Additionally, you will require the following packages which are found only in the Arch User Repository.

Most of them are on Github if you want to compile them yourselves.
Installing these will take some time, so one-by-one install these:

If you are on Debian or Ubuntu

The following program qt-virt-manager is huge and takes a long time to compile but you might need it:

You should reboot now to apply kernel changes for qemu.

Next, download the OSX-KVM Repository:
This folder will be referred to as the OSX-KVM folder.

Your macOS disk will be created in the folder we are about to download.

Make sure you choose a disk with enough space.

Inside the macOS version folder that you downloaded from gibMacOS, we will turn the .dmg into .img
Make sure you have enough disk space here!

Find BaseSystem.dmg inside the gibMacOS downloaded folder. It should be around 500mb.
Convert it to .img:

Now move the BaseSystem.img that you just created FROM the gibMacOS folder -> TO THE OSX-KVM FOLDER

Decide now how big you want the macOS disk size to be.

I want an 80GB macOS disk size so I run the command below.
Note: do not change “mac_hdd_ng.img” or it will break the scripts later.

The 80GB empty disk has been created.
The macOS image is ready.

Now, create the network for the OSX VM

If you have successfully installed all the AUR packages above, you should be able to run this:

Mac is now ready to boot.

If everything looks okay, you are ready to boot macOS on Arch Linux.

After about a minute, the macOS recovery GUI will appear and you can select your language.

When you reach the macOS Utilities screen, seleck “Disk Utility”

In the top left, select “Show All Devices”. Not required to see the disk we are using, but helpful to visualize what is happening

Select the disk which has 80GB and is “Uninitialized”.

Do not change the Format or Scheme.

Erasing the disk here does nothing to your real computer. This is a virtual drive.

Create a new partition for macOS on your QEMU Drive

NOTE: YOU MUST REDUCE THE DISK SIZE BY A SMALL AMOUNT TO BE ABLE TO PRESS APPLY

Note: this will NOT steal 80GB straight away from your hard drive:  it’s just virtually allocating it from your host machine’s disk.

When that has finished, you can close the “Disk Utility”

Have fun using macOS on Linux with QEMU!

How To Setup VNC, XRDP, XDoTool on Ubuntu (Azure, Gcloud)

As CentOS is new, we need to add additional repos, namely epel-testing.

Then, enable EPEL testing which has all the missing packages from CentOS 7 in CentOS 8.

Here is a one block automated install for Python3.8 on CentOS:

I recently upgraded Firefox to the latest build.

Then, my geckodriver binary stopped working in Python.

The main problem, I had an outdated Geckodriver version (from the distro repo)

Geckordriver should be updated to the latest version: 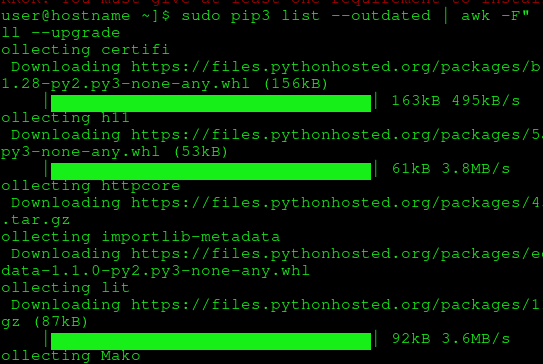 “pip3 list –outdated” shows us all installed packages that are currently out of date.

And as a one-liner:

Docker doesn’t come with “stock” repos on CentOS, some variations of alias programs are installations like podman.

These lack many of the core commands of the “real” Docker.

Here is a guide to install Docker Latest Version on CentOS.

As we all know, the shell builtin variable $RANDOM is a pseudo random number generator.

Today, we will be looking at some creative ways to generate psuedo random numbers, trying to use shell builtins as much as possible.

The Best Solution is shuf (not exactly builtin though)

Ways to generate various strings of numbers in BASH

From the 2 above scenarios, we analyse the distribution of the digits and find out the frequency of each value in order to see how random they really are:

Now, we want to test the frequency of each digit:

However, the output is totally different:

The second digit from $RANDOM$RANDOM

A digit from cksum <<< $RANDOM$RANDOM