this should list the device name that controls your backlight

In our case, it is amdgpu_bl0 so we cd into that folder and see the brightness file. Brightness is stored in the file ./amdgpu_bl0/brightess

This gives us xbacklight command ability in XFCE4 without using root

How to enable Realtek Lenovo Wifi Card drivers in a 2019 Lenovo Ideapad built in 2019. Lenovo Ideapad needs a specific new WiFi driver called rtl8821ce. This package is only available on the Arch User Repository AUR at the time of writing from a guy named tomaspinho.

If you are doing a fresh Arch install on a new Lenovo ideapad, you will need an ethernet cable or a USB internet dongle or possibly hotspot/tether your mobile phone to get connected because the WiFi is not present on the Arch Live USB at time of writing.

Once you have internet, you will need an AUR manager or to build rtl8821ce from the git. You will also need dkms.

The following tutorial was done after the base install.txt was completed and may not work if done while chroot’ed in arch-chroot.

This installs linux-headers, required to match the kernel package and dkms.

If this is a fresh Arch install, you may need git

Now that you have yay, install rtl8821ce

After install, run ip link to see if your new interface has been installed (may need reboot)

In our case, the WiFi or wireless interface network is called wlp2s0

However, on first run, this gives an error. The error is quite clear, “the interface is already running.” Naturally, you can stop it:

Did this help you connect to internet on a 2019 Ideapad Laptop?

Feel free to let us know in the comments below!

This error is reproducible in Debian 10 Buster as of time of writing on new L340 Ideapad and Thinkpad laptops by Lenovo.

With a 2019 Ryzen 3, Ryzen 5, or Ryzen 7 AMD CPU Laptop with inbuilt Radeon Vega AMD Graphics card, you will encounter a FrameBuffer error on upgrading Debian 9 to Debian 10.

If you upgrade to Debian 10 on one of these distros, you may lose xorg functionality. It may have something to do with nvidia. dffgfg

From what I understand, Debian 10 does not yet have the kernel drivers required for the 2019 Ryzen CPU combined GPU. Adding nomodeset to the GRUB boot option does not solve the issue.

Solution? Wait for kernel updates or install another distro…

Need immediate access? You can probably still boot into Debian and if you see a blinking underscore cursor, press Ctrl+Alt F1 or Ctrl+Alt F5 to get a console under tty5 or tty6.

Then you’ll need to connect to WiFi or Ethernet.

If you need to make bootable USB devices, use either dd method or Etcher command line version.

To disable the speaker immediately, as root

To permanently disable the speaker, either put that on a startup script or install some other audio & system sounds.

After you’ve done some further installations like alsa audio mixer etc. you will probably want the speakers back on, so don’t forget that you disabled them lol and to re-enable them as required.

Since our last dist-upgrade from Debian 8 Wheezy to Debian 9 Stretch, we’ve encountered quite a few new issues. By issues, I am referring to incompatibilities with any manual changes that I have made to my PC.

Most of the repositories that I have manually added have to be manually adjusted from wheezy to stretch. After that, we tried the usual sudo apt-get update and it never completed it’s course.

This one line solved the 0% Working issue where the package list downloading would hang and become stuck on Debian 9.

Only recently I found out Etcher.io didn’t make bootable Windows USB’s properly, or rather, did not support it at all.

There are 3 ways to make Windows Bootable USBs on Debian Ubuntu of any Linux distro, but first you’ll need a Windows ISO which Windows themselves now provide. Just search “Windows ISO” and make sure you’re at microsoft.com. At the time of writing, Windows was providing the Windows 10 ISO here.

1)  Use WoeUSB on Ubuntu or Debian to make Bootable Windows USBs from ISO.

The deb packages for WoeUSB are found here, ignore the .exe files in this directory.

2) Use a Windows VirtualBox to create a bootable USB using Rufus.

You’ll need to install VirtualBox (sudo apt-get install virtualbox) and then install a virtual Windows machine using the ISO from Microsoft.com at the start of this article.

You will also have to install VirtualBox Guest Additions to be able to passthrough the physical USB stick straight into the VirtualBox. To do that, boot your virtual machine, select Devices on the toolbar, and select insert Guest Additions CD. Install it, reboot, and you’ll now be able to connect your USB. To connect your USB, go to the virtual machine settings and add USB 2.0 or USB 3.0 support. You can only add USB support when the machine is off. If you haven’t installed the guest additions correctly, it will give you an error on booting.

If your VirtualBox doesn’t recognize the USB or fails to install drivers etc., make sure it’s formatted as Fat32 (use gnome-disks or gparted, might need to reformat it a few times with both programs).

When you boot the machine, bottom right of the virtual machine window has a small USB icon, right click it, and select the desired USB that you’d like to pass straight through to the VM.

Here is a screenshot of me successfully making a Bootable Windows USB using Rufus on a VirtualBox Windows 7 while my host OS is Debian. 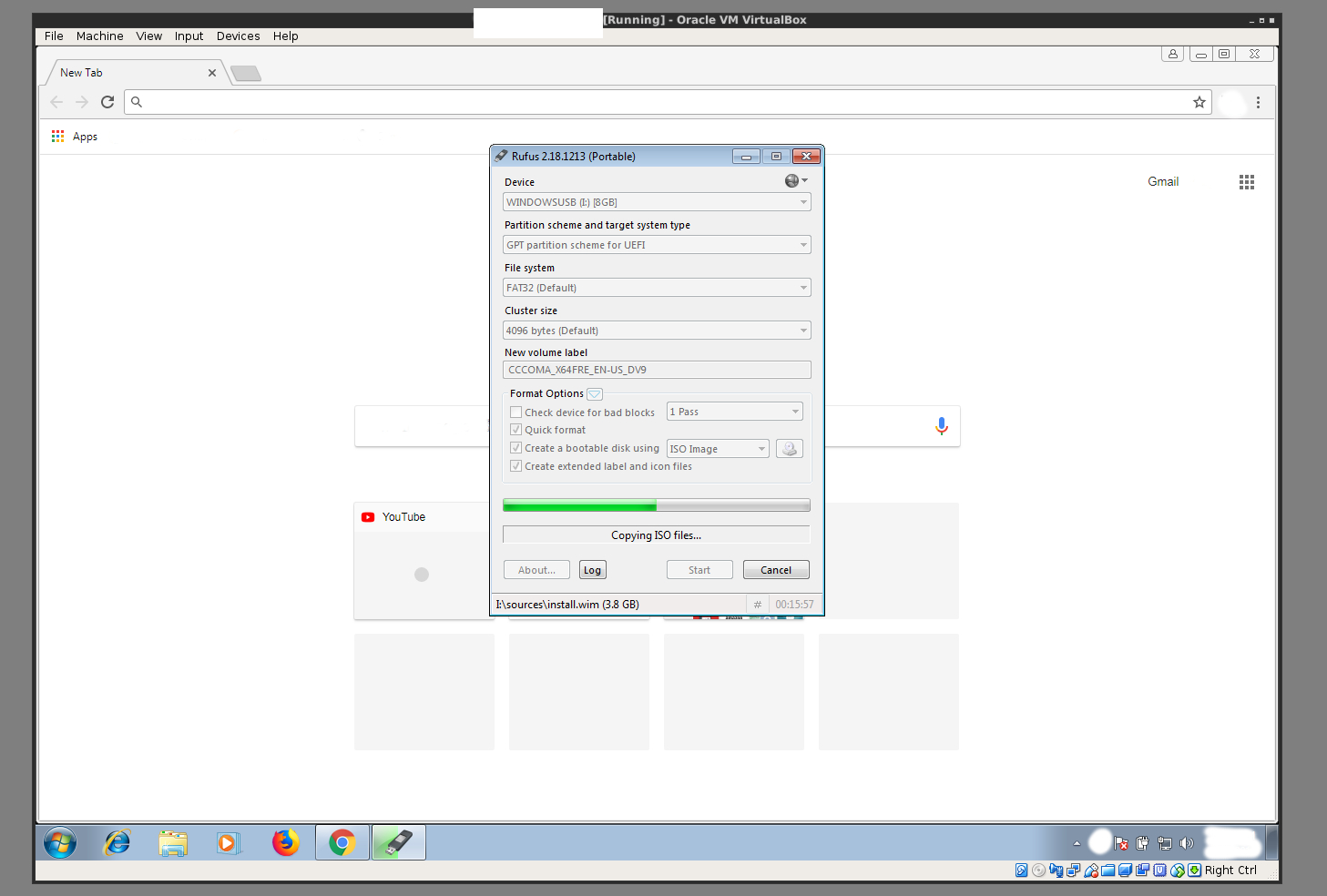 3) Use another Windows PC to create the bootable USB.

Playing around with GRUB is a nightmare for the first few times, and often GRUB reinstallations will actually be mandatory when installing multiple operating systems on the same drive, or multiple drives, or after reinstalling windows or vice versa.

If you can’t boot into your OS, you’ll need a linux live CD of any kind (Debian or Ubuntu) or a rescue disc. The most natural way to reinstall GRUB is to boot into your main OS via a live CD and run the grub-install command. I prefer not to do this as my live CD is around 4GB and can take 5-20 minutes to create the USB. And if you don’t have your OS live CD laying around, you’ll need another PC to either download it and create the bootable USB (60 minute exercise at least), or you can use a smaller, lighter, recovery OS on a bootable USB.

It’s a tiny 20MB ISO that you can use Etcher to create a Super Grub2 Disk bootable USB in about 30 seconds. Any version will work. This will get you back into your PC. Once you’re inside you can run the grub-install command. On Debian this is the only command that worked for me completely:

Open gparted or gnome-disks and find the /dev/sdX of the drive you want to install grub to. Your main partition will be either /dev/sda or /dev/sdb or /dev/sdc or /dev/sd0. It should show that it’s mounted at / which is your root directory of the OS you’re in, you’re main OS.

Replace sdabc0 above with whatever your drive is.

How to use gparted live when your GRUB isn’t working with Super Grub2 Disk and when you only have one USB.

Now, here’s a challenge: rescue your linux computer with one USB.

Get Super Grub2 Disk as described above and boot into your normal OS via the above method. After you’re in your normal OS, download Rescatux but don’t burn it to a USB.

Instead, as root, open your boot folder and make a folder called boot-isos and put Rescatux in that folder.

Download the latest Rescatux ISO from here and put it in that folder.

Now when you boot using Super Grub2 Disk, you’ll see a bootable ISO entry with the Rescatux ISO which you can boot into! This is because Rescatux is setup for loopback mount meaning you can boot into it on a hard disk instead of a USB. Booting a live distro from live USB. Rescatux has gparted and you can make changes to your partitions without being mounted but Rescatux does not have grub-install. This helped me when I had one single USB but I wanted to use both “gparted live” and Super Grub2 Disk at the same time without losing my Super Grub2 Disk USB.

Here is a “How To” tutorial for using John the Ripper on VPS or Dedicated instances so that you can leave it running overnight, for example.

# get the latest JUMBO version of John
wget http://www.openwall.com/john/j/john-1.8.0-jumbo-1.tar.gz

Ctrl + V (paste shortcut) doesn’t work everywhere that you expect it to work.

For example, using noVNC, I really need to paste certain strings that I’ve already copied to clipboard with Ctrl + C.

The program for the job is xdotool.