One morning my Ubuntu installation stopped . I’m now feel a lot more comfortable with linux distributions but at the time I was freaking out.

For this example, I will be installing the .deb file of Conky Manager by Tony George which is an awesome system load manager that displays real-time system load, CPU & RAM usage.

When you want to use PPA or any other .deb based application,

Install a .deb file from PPA or another random website

Make a folder in your Downloads or Documents folder called Debs.

Move the .deb file that you downloaded to that folder.

This will install all relevant dependencies too.

This method does not fill your /etc/apt/sources.list with a whole heap of random URLs.

To uninstall a .deb file at a later date

Go back to the folder called Debs that we created earlier.

“This plugin is vulnerable and needs to be updated”

Yes, flash is notoriously vulnerable and is updated almost weekly because it’s in almost everyone’s browser and is an easy target for hackers.

To update flash on Debian, open a terminal and execute:

This will download the latest flash plugin for firefox/iceweasel and install it into your browser:

You’re writing a script that maybe works with a CSV that you’ve downloaded as a cron job and want to delete the first column so that it uploads nicely somewhere else, maybe to a MySQL database.

How To Increase PHP File Upload Limit on CentOS 7 with one line of bash.

SSH into your server as root and execute the following command:

P.S. you can verify your new maximum PHP file upload size is by executing:

SSH into your server as root. Use vi or nano to edit the php.ini file:

your server or restart httpd:

Add a new shortcut with the following command:

I used the keyboard shortcode Alt + (-), meaning the minus key on my numpad.

I used the keyboard shortcode Alt + (+), meaning the plus key on my numpad.

My laptop keyboard has a number pad so this is pretty comfortable, but if you don’t have a numpad, you’ll need to choose a different unused combination.

WARNING: Don’t try and set the keyboard as Alt F4 and Alt F5 because are already bound to “close the window”…

Solution:
Opens Application Finder so you can type in the first few letters of any application and hit enter.

I was using a small MiFi router for a while and when I would come back inside, more often than not the network would not be found again even though I was sitting right next to my computer.

The same would happen with iPhone Hostpot Wifi not showing up even though it was right next to me. If the WiFi disconnects and can’t be found again for a few minutes, the fastest way to jump start the WiFi network list is below.

A solution to hard reset the WiFi network list on Debian, Ubuntu, Mint or other distros is as follows:

This command will restart network manager and force search for nearby WiFi networks.

However, instead of typing this in each time I came back inside or turned on iPhone personal hotspot, I made a launcher icon that would hard refresh the list of available networks and in turn, be able to connect to my WiFi again.

Go to the desktop, right click and create a new launcher. 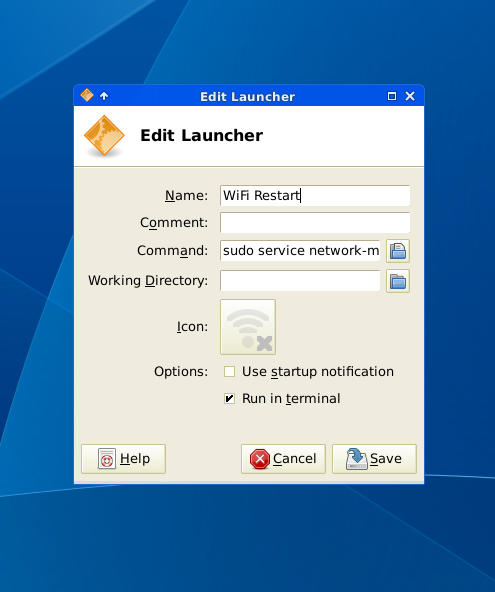 Save this launcher, and then drag it onto your launcher area.

Now, when your WiFi disconencts or your personal hotspot isn’t being found, just press the WiFi restart button and your network will show up again in a matter of seconds.

The icon I use is network-wireless-offline-symbolic in Status Icons. 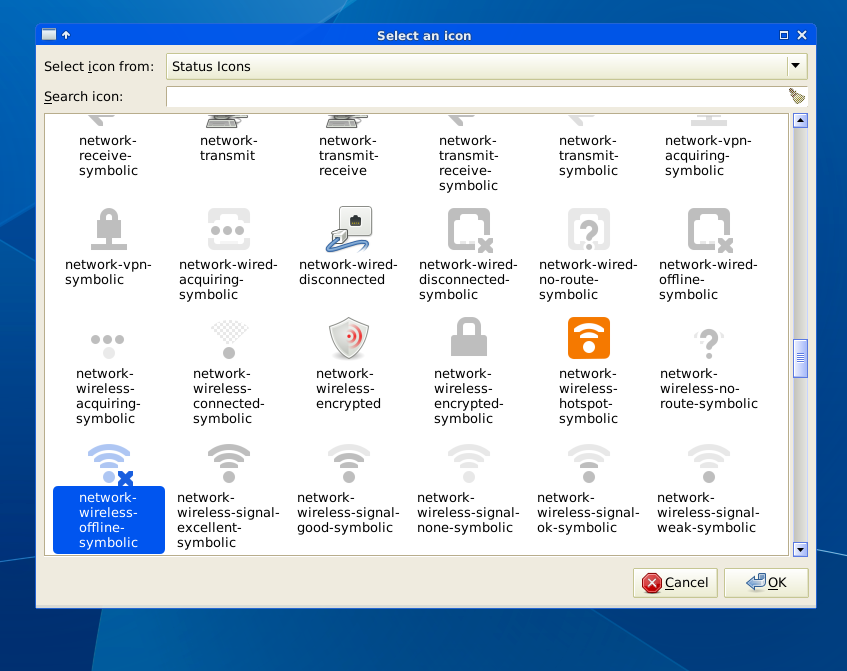 Some javascript based websites were hogging my click actions and opening links that I wanted to open in new tabs in the same window/tab.

Since I prefer using the track-pad now, I wanted a fast solution to either middle mouse click on links to open in new windows or a way to rapidly right click, open in new tab.

An awesome solution I am currently using is as follows:

xdotool is a fake keyboard & mouse input program that you can emulate clicks via the terminal.

For the keys, I chose:

Now, when I want to open links in a new tab, I simply move my mouse and hover over links and while holding left Ctrl, I tap the left Windows key.

It’s actually much faster than middle clicking and it allows me to rapidly tap the windows key while hovering over a page full of links.

I read a few different solutions for fixing the sound toggle on Debian via the command line but the only solution that I could make a keyboard shortcut for was:

Hard unmute Pulse Audio in Debian, Xfce when the sound won’t come back on after muting:

To set this as a keyboard shortcut

This was a temporary fix and I will change it to Fn & F10 once I learn how to change the Fn hardcoded keys.